We’re capping off yet another interesting week for the markets, the economy, the policy arena, and the ongoing Coronavirus pandemic. Below, we’re providing you with a full recap of the latest news you should know, plus what to watch out for as we head into the week.

What Happened in the Markets?

In our recap last week, we asked you to “remember that while the markets are designed to handle uncertainty over longer time horizons, they tend to have a habit of behaving unpredictably in the short run.” Was that ever the case last week.

When markets closed on Friday, March 20, the S&P 500 had lost roughly 30% of its value from its February 19 peak, and suffered its worst one-week decline since 2008. It had all but wiped out all gains accumulated under the Trump administration. At the time, there was a Senate stimulus bill largely expected to pass over the weekend. The Fed had already cut interest rates to 0% and announced rescue measures around its bond-buying program to the tune of $700 billion. The global health crisis around COVID-19 had started its exponential climb in reported cases in the United States, with some experts labeling New York as the new epicenter of the outbreak. In short, many expected the substantial volatility we experienced that week to continue.

Instead, last week, the major indexes rallied for one of their best weeks ever. The S&P 500 posted its biggest three-day gain since 1933 and recorded its best week since March 2009 — just one week after its worst week since October 2008. The Dow turned in its best weekly performance since 1938. Despite paring some of their gains on Friday and finishing the session in the red, the S&P 500 gained 10.3% for the week, while the Dow gained 12.8%. Still, investors who attempted to time the market after March 20th’s close would have missed out on the quickest bear market recovery ever. 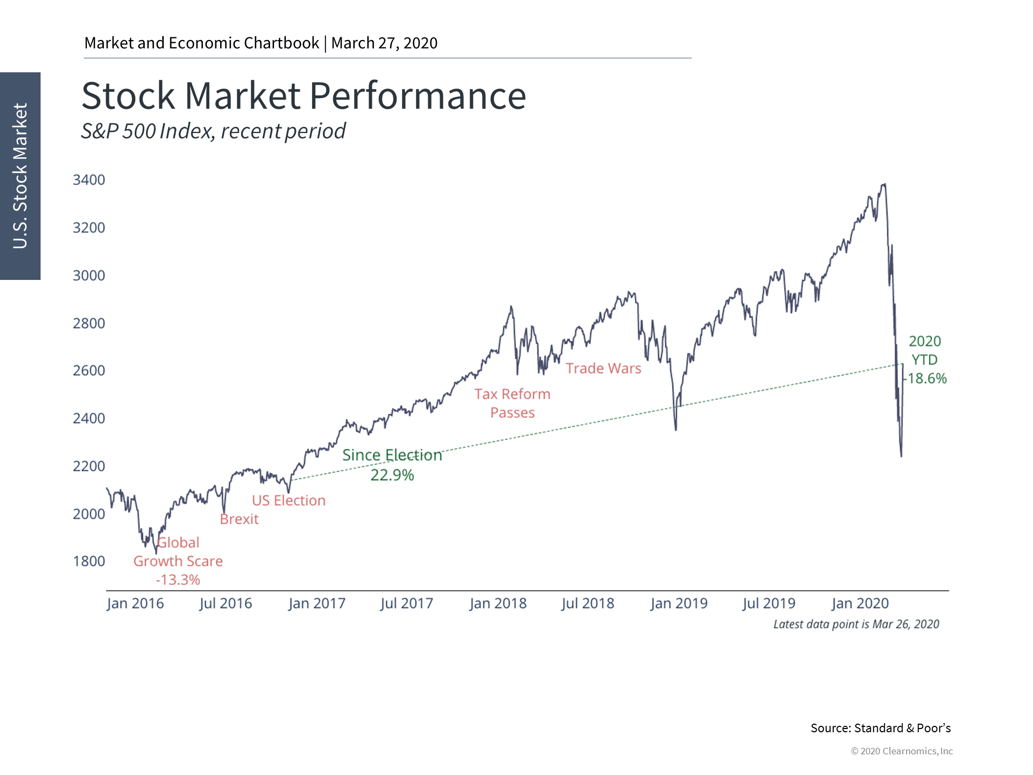 There were, of course, fiscal and monetary policy measures taken to stem the downward tide and ease investors’ fears. After two failed votes, the Senate passed a $2 trillion stimulus bill (full details below). The Fed announced last Monday morning that there would be no limits to its bond-buying program, which had originally been capped at $700 billion, and announced new credit facilities, expanded liquidity pools, and announced the launch of a “Main Street Business Lending Program.”

But if the market performance feels disconnected from the economic reality for individuals, families, and business owners, it very well may be:

It may be that this correction has already priced-in a sharp recession and economic distress, leading to lower expectations for consumption, production, and growth. It may also be the case that these are short-term fluctuations, as markets handle uncertainty and reassess expectations. We don’t speculate because we can’t predict what the future holds. We don’t know for certain how the COVID-19 public health crisis will play out, and we don’t know how the market will react to news — positive or negative — that arises from it.

Two of our last three Federal Reserve Chairmen made surprise appearances last week with the same message in mind: 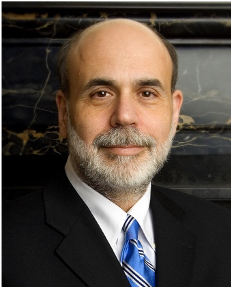 Ben Bernanke, who oversaw the Federal Reserve’s response to the 2008 financial crisis, said on Wednesday that our current economic halt resembles more of a natural disaster than a systemic monetary or fiscal shock. Bernanke said he expects a “very sharp” U.S. recession but a “fairly quick” recovery. Most importantly, he noted that “if we don’t get the public health right,” there’s no monetary policy by the Fed or fiscal legislation to overcome that. 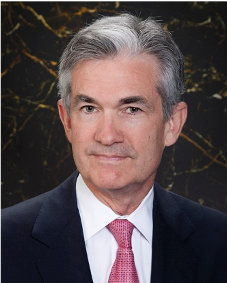 Meanwhile, current Fed Chairman Jerome Powell said on Thursday that we may be in a recession already, but that he “would point to the difference between this and a normal recession.” Powell added, “there is nothing fundamentally wrong with our economy … we are starting from a very strong position.” He echoed Dr. Anthony Fauci, one of the top scientists in the Coronavirus Task Force, that the timetable of a recovery would be dictated by the virus.

We would be remiss to ask long-term investors to ignore the noise and stay disciplined when it comes to pullbacks or corrections, and not request the same of rallies and gains. With the new normal of substantial volatility for the time being, nearly every trading session feels like a new loop around the roller coaster. We continue to take a long-term perspective of what’s to come.

What Should You Keep in Mind for Next Week?

The recent roller coaster ride of dramatic selloffs and forceful rebounds illustrates an important concept that all long-term investors should remember: You are equipped with a toolkit that many investors do not have. You are investing with a portfolio that is well-diversified across multiple different asset classes, one that reflects your tolerance for risk and the goals for which you are investing. Your portfolio is designed to weather turbulent market conditions (which are a sign that the market is working as it should; volatility is not an anomaly), including moments like the one we’re experiencing now.

As we stated in our last recap, we’re no stranger to crises — we’ve been through events that have instilled fear and anxiety in all of us. These climates are never easy for investors, and the barrage of the 24/7 news cycle does not make life any easier. Remember these takeaways:

These takeaways, combined with the support of a fiduciary financial advisor, can be your best defense against market volatility.

After a unanimous vote in the Senate, the House gave final approval Friday on the largest stimulus bill in modern American history, with President Trump signing it into law thereafter. It is the latest legislative effort designed to bolster the U.S. economy during the ongoing Coronavirus pandemic.

Here is a breakdown of the bill for individuals, businesses, state and local governments, and hospitals:

For State and Local Governments:

“This is not a moment of celebration, but one of necessity,” Minority Leader Chuck Schumer said on the Senate floor last Wednesday. "To all Americans I say, ‘Help is on the way.’”

We hope that you are all staying safe and prioritizing your health, while following the guidelines laid out by the CDC and WHO. Let’s end this week’s recap with some positive news:

In the meantime, please continue to stay tuned for more updates on the news and events that impact your day-to-day financial life. If you have any questions, please contact me.

2Based on the Markit purchasing managers’ index for the services sector and composite measure.

3Based on data from Markit.

The S&P 500 is a market capitalization-weighted index that tracks the 500 largest companies listed on the New York Stock Exchange or NASDAQ Composite. It is used as a benchmark of the overall stock market’s performance.

Return data represent past performance and are not indicative of future results. Historical performance does not reflect applicable transaction, management or other applicable fees as noted, the incurrence of which would decrease hypothetical, historical returns.

Source for all charts and text contained within graphics: © 2020 Clearnomics, Inc. All Rights Reserved. The information contained herein is proprietary to Clearnomics and/or its content providers and may not be copied or distributed. The information contained herein has been obtained from sources believed to be reliable, but is not necessarily complete and its accuracy cannot be guaranteed. No representation or warranty, express or implied, is made as to the fairness, accuracy, completeness or correctness of the information and opinions contained herein. All reports, charts and graphics compiled by Clearnomics or any of its affiliated websites, applications or services are issued without regard to the specific investment objectives, financial situation, or particular needs of any specific recipient and any commentary for any and all markets should not be construed as a recommendation to buy, sell or hold any security –including mutual funds, exchange traded funds or company stock.